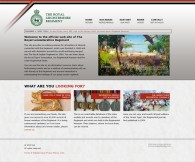 The Royal Leicestershire Regiment was founded in 1688 and served with distinction around the world until being merged into The Royal Anglian Regiment in 1964.

The Regimental Trustees wanted to make some major changes to the management of  their existing databases of soldier and medal records, which could not be updated by themselves.

Therefore it was imperative to encourage and open up other forms of contact and mechanisms for accessing their growing archive through technology and the Internet.

The Regimental Trustees had previously met TownsWeb Archiving Ltd (TWA) through the Army Museums Ogilby Trust (AMOT), and had seen some of the work that they had undertaken for other regiments and were interested to see how TWA might be able to help them...