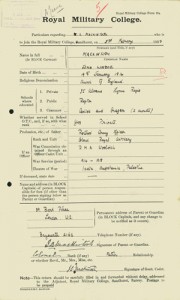 TownsWeb Archiving Ltd has recently completed the next stage in digitising the Sandhurst Military Academy archive and placing the content online.

Townsweb Archiving Ltd undertook the scanning and transcription of 8,130 very fragile Personal Information Sheets dating from 1914 to 1939. These sheets contain information such as the Cadet Name and also their Date of Admission. These records can be searched and downloaded via the Sandhurst Archive website.

Townsweb Archiving then digitised and transcribed a list of personnel records detailing staff that served at Woolwich in the 19th Century. Again, these records now fully searchable and available for download via the Archive website.

Finally Townsweb Archiving digitised a 19th century volume called ‘Woolwich History’. This very rare and precious 206 page book tells the a very interesting story of the Royal Military Academy Woolwich from the late 18th to the end of the 19th century. This volume can now be searched (via OCR’d text) and also purchased in electronic form via a new ‘shop’ area on the Sandhurst Archive Website.

The new ‘shop’ area also allows the purchase of the latest E-Army List Publications (2006-2009, 2010 & 2011). The ‘shop’ will hopefully be expanded in future to include all manner of interesting Sandhurst material.

‘I’m very pleased that we’ve managed to add Personal Information Sheets, Staff Records and the 19th Century Woolwich History book to our website. It’s very exciting watching our digital archive grow online. We have a very unique history and some incredibly interesting documents that we know members of the public will be interested in seeing. We would again like to thank the staff at TownsWeb Archiving for their skill in seamlessly integrating the new content in to the website.’

You can search all of these records at http://archive.sandhurstcollection.org.uk/