(Completely free and only takes 30 seconds)
Home » In-House vs. Outsourcing Your Digitisation Project - What are the Pros and Cons?

In-House vs. Outsourcing Your Digitisation Project - What are the Pros and Cons? 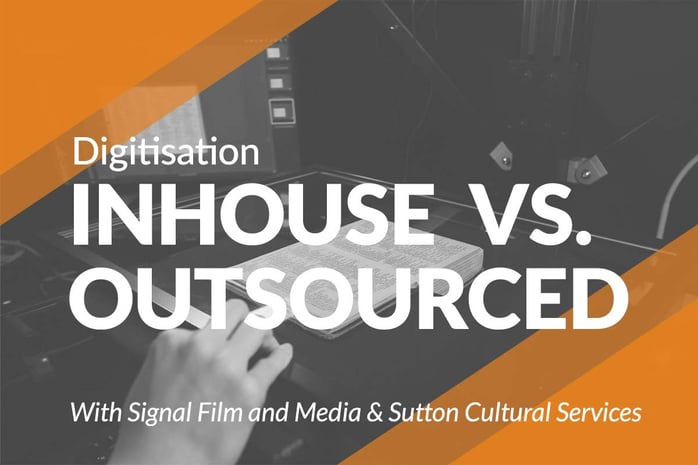 Have You Weighed up Your Digitisation Options Yet?

Following on from our recent drive exploring practical ways to make those funding applications more successful, Jess Sturman-Coombs at TownsWeb Archiving talked to Abby Matthews, Archive and Family History Centre Manager at Sutton Cultural Services, and Julia Parks, Project Manager at Signal Film and Media, about the alternative options available when it comes to digitisation.

Here we share Abby and Julia’s unique experiences and insight into each option, providing the heritage industry with a comprehensive and balanced perspective, helping organisations to decide which approach is best for them and their specific project goals.

Here you will find two fascinating and vibrant projects, both offering an open and honest analysis of the alternative methods used.

First, Abby Matthews talks about her experience of digitising in-house:

The Past on Glass: Digitising the Knights-Whittome Glass Plate Negative Collection

From 1904-1918, 18 High Street, Sutton, South London (then Surrey) was occupied by David Knights-Whittome; ‘Photographer to the King’. From this small shop, and another premises in Epsom, Knights-Whittome photographed thousands of local people, places, events and institutions as well as country houses, the aristocracy and the Royal Family, during a seminal period in British history.

In 1918, Knights-Whittome abandoned professional photography and moved away from Sutton altogether, leaving behind his vast collection of glass plate negatives. Over time these were largely forgotten, and it was only in the 1980s, after the building was earmarked for demolition, that the collection was rediscovered in the cellar and removed to Sutton Archives. From 2014-2018, two Heritage Lottery Fund grants enabled work on this important and endangered archive to be undertaken. During this time, the collection of over 10,000 glass plate negatives, and a number of prints, albums and ledgers, were fully conserved, digitised and catalogued. The project employed only one paid member of staff. 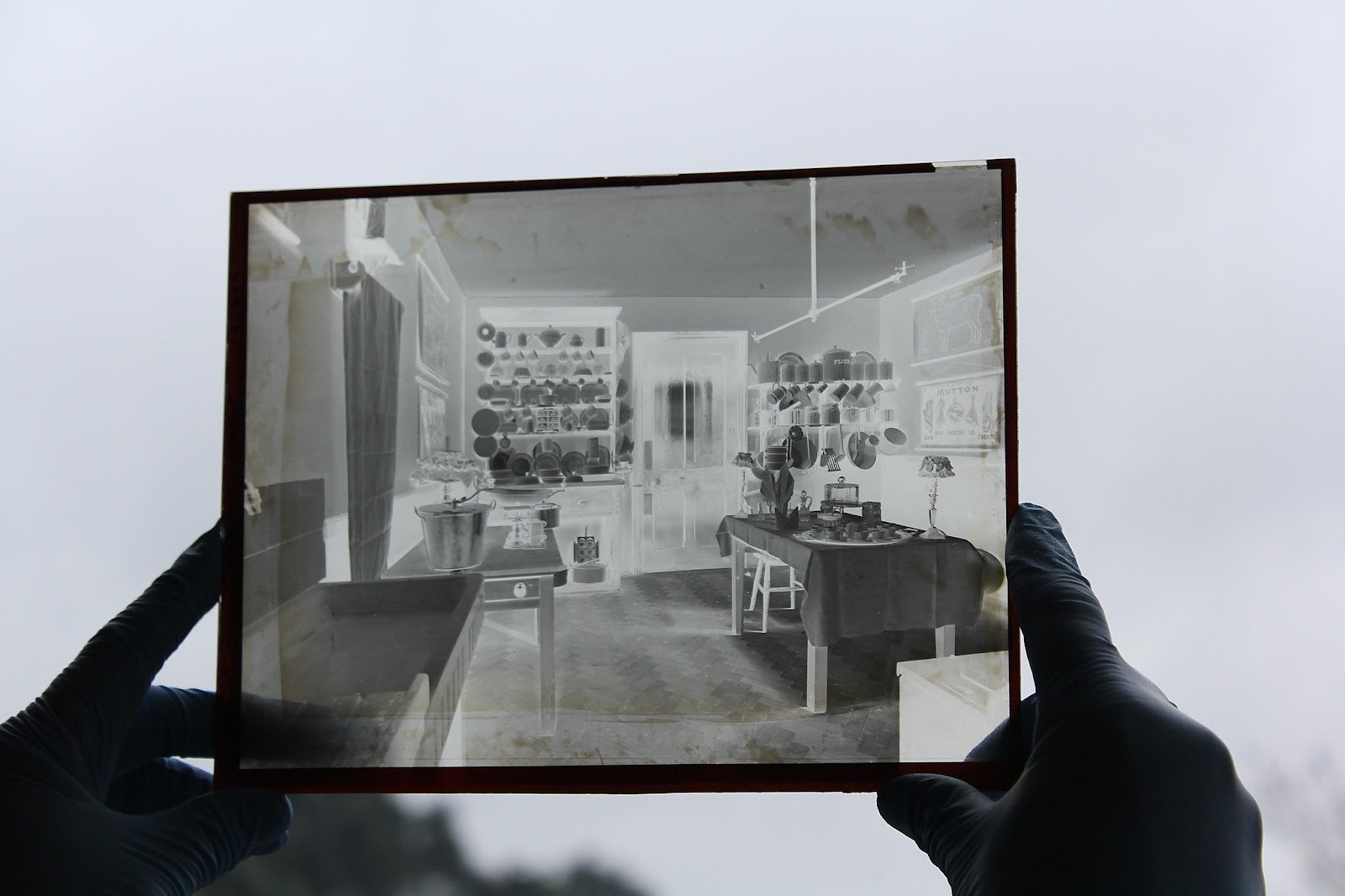 The in-house digitisation was a vast undertaking, and a huge learning curve. Along the way we encountered a wealth of conflicting advice. Working with a team of over 60 volunteers during the life of the project, it was incredibly challenging to standardise practice and ensure that our outputs were consistent.

We produced standards, automated everything we could, and revised our approach and workflows as we went. But, inevitably, we still find occasional mistakes in our data. That said, we worked hard to ensure best practice and, overall, the outputs we produced were to a very high standard.

Now complete, over 10,700 images appear on our dedicated ‘Past on Glass’ Flickr site, and these represent a lost generation of men, women and children from our borough and the surrounding areas.

In our project evaluation we calculated that in the four years the Flickr site had been in place, it had attracted over 2,157,000 views, with countless comments, enquiries and identifications from members of the public and the images have since appeared in the final scenes of the feature film ‘1917’ where Lance Corporal Schofield rests by a tree and takes out at a photo of his family with a message on the reverse that reads: ‘Come back to us'.

For us, the online interest generated by the collection fully justified all the hard work of digitising in-house. It has been a springboard to greater community outreach and hopefully to future projects at the archive.

To find out more about this project and to stay connected you can follow updates on Twitter at @SuttonArchives.

This leads us nicely to Julia Parks who tells us all about her experience with outsourcing digitisation.

Seeing the North with Sankey

'Seeing the North with Sankey’ is a two-year heritage project that is conserving and connecting people across Barrow-in-Furness and Cumbria to the Sankey Family Photographic Collection. The project is funded by the National Lottery Heritage Fund and is run by Signal Film and Media in collaboration with Cumbria Archives and other local partners.

The Sankeys were a father and son duo who documented life in Barrow and Cumbria over 80 years, capturing the landscape, cultural changes, individuals, industry and tourism.

In October 2019 the entire Sankey Collection was transferred from the Sankey family basement to Townsweb Archiving, a specialist digitisation company, ready to be digitised and re-packaged. The whole collection included 110 cardboard boxes containing over 9000 glass plate negatives, 22 original photographic albums, and about 10 handwritten and typed catalogues.

Due to the extensive nature of the collection, and the relationship between images and catalogues, we decided to work with a digitisation company as opposed to taking on this work in-house. This decision was made during our initial project consultation process for the following three reasons:

We also felt this method would allow us to work with our volunteers on the interpretation of the photographs, exploring the links between the catalogues and the images – as opposed to having to wait for a long time to get the whole collection captured.

Our decision to work with Townsweb Archiving has turned out to be a successful one. The collection was received by Townsweb in October and the files were made available to us in February 2020.

Our workshop program for volunteers began in January 2020 and attracted over 50 local people wanting to get involved. Many were keen to see old images of their town, and others wanted to take part in the interpretation and cataloguing of the newly digitised photographs. This in itself was a huge undertaking and involved the volunteers transcribing thousands of handwritten catalogues, postcard books, and negatives. There has been much cross referencing between all three in order to work out image titles and locations.

I believe this is where the important area of the project has been and if we had worked in-house, I believe much of our time would have been spent negotiating the process of the photographs being captured, as opposed to exploring what they are showing.

Ultimately the volunteers have catalogued over 7500 images from the postcard albums; transcribed 3 catalogues containing 100’s of pages and are now cataloguing the 9000 glass plate negatives, of which 3000 have already been completed. They have also created four online exhibitions and held six Facebook Live events. All of this work feeds into other elements of the projects – the school workshops and creative workshops we have been running with different community groups in Barrow.

Having discovered more about the projects themselves, we posed a few questions to see whether Julia would ever consider the alternative approach to outsourcing digitisation.


I really enjoyed hearing about Abby’s project and it sounds like it has been hugely successful. However, it would be unlikely that we would take on a project where we digitised our own material. This is primarily down to space and access to equipment. We run a wide range of projects and don’t have huge amounts of storage space.

Lastly, for us, much of the focus has been on researching and cataloging the images. We are keen to make links across the postcards, albums and negative books and have descriptions, dedicated exhibitions, and longer research pieces on images. This in itself is a huge job to manage - checking and supporting the many volunteers and creatives who have been involved with the project. If we were to have waited until after we had digitised all the work I don’t think this level of engagement would have been possible.


It was early on in the project that we decided to work with a digitisation company. We originally started open meetings and it was from the huge local interest that we started the project. It was clear early on that we would use a digitisation company and as part of our National Lottery Heritage funding we had to get various quotes. Our original budget had not accounted for the full cost of packaging so, to avoid changing the budget drastically, we decided to reduce the number of documents we would have digitised.

For example, originally we were going to have every single postcard in the postcard books photographed individually but, instead, we went for full pages. This means, overall, they are less high quality than, say, the negatives. We also only got one catalogue transcribed and the remaining ones were done by volunteers. Postcards, again, were going to be scanned individually, but this has been another job completed by volunteers. This has been a great way of engaging local people.

We also posed a few questions to Abby, to get her in-house perspective:


For us, at the time of planning, outsourcing was not an affordable option. We had already worked with the HLF to develop our project application, and much of the activity plan was aimed at community based outcomes, combating loneliness, offering work experience and learning new skills, and volunteering played a huge part in that. It has been a stepping stone for us in terms of building our outreach activity and volunteer base.

Having said that, in-house digitisation is a huge undertaking in terms of coordination. I would say that, unless you have a project post factored into your budget, it would be quite unrealistic to manage a project of this scale alongside other roles and responsibilities.  Certainly, if I was to look at digitising other areas of the collection, and especially oversized or delicate materials, I would be keen to outsource this to a professional company.

When we started the digitisation, we envisaged a workflow where volunteers would take responsibility for an item all the way through. From assessing condition, cleaning, rehousing, photographing the envelope, transcribing information, scanning the plate, cataloguing, uploading to the web and research. It quickly became apparent that not everyone wanted, or was able, to do all of this.  Some parts of the process could be quite physical - lifting boxes, standing or climbing steps to photograph envelopes for example, and some required keen eyesight (transcribing information/retouching scans). For some older volunteers this could be an issue so, after a bit of trial and error, we started to allocate jobs to individuals suited to their skills and abilities.

We were lucky at the beginning of the project to have some young professionals volunteer who were able to lead on training with less experienced members of the team, but it’s certainly true that even with training you can’t guarantee that a volunteer will be capable or happy to do certain tasks, and you have to be led by that person’s ability and willingness to a certain extent. What it meant in reality was that we ended up with quite a disjointed process, with items moving between several people, presenting several opportunities for mistakes to be made. This was the main issue we had really, ensuring that all these functions and tasks linked up, were recorded and checked, and that we didn’t end up with multiple or contradictory records for the same item.

We are sure you will agree there is a lot of great advice here and a lot to compare and contrast. So, as an additional and separate ‘quick reference’ resource, our guests have kindly gathered together their Top Tips for digitising either in-house or through outsourcing. You can access this content right here: Top Tips for Digitisation: In-house vs. Outsourced

A huge thanks to both Abby and Julia for the great deal of time and effort they have put into compiling the details of their own individual projects in order to support like organisations and the wider industry in making an informed choice into which approach (in-house or outsourcing) is the best option to take when embarking on a digitisation project.

Here we have real experiences, compared side-by-side, and the results speak for themselves. We are very grateful to both Abby and Julia for this remarkably helpful resource, and we are sure you will join us in thanking them and celebrating the results of their successful projects.